I have to admit, I would never have considered taking a toddler ice skating until my aunt in Holland suggested it. To be fair, some say Dutch babies are actually born wearing ice skates…

Little Miss really enjoyed her first time skating in Holland over Christmas. So much so, I had to bribe her with chocolate to get her off the ice. And then I made the promise that we would go skating in Peterborough when we got back home. So one Sunday morning in January we drove into Peterborough and went to the ‘ice tots’ session at Planet Ice.

The ice tots session runs 10-11am on Sunday mornings. It is especially for kids 18 months to 5 years.  I wasn’t really sure what to expect, and I have to say I was surprised at how many people had turned up. Top tip #1, get there early. I arrived just on 10am and ended up queuing for about 10 minutes. When I spoke to Planet Ice about this, they said that winter is always really busy and they recommend arriving early if you want to take full advantage of skating the whole hour.

Once we did get through, I had a bit of a palaver with getting skates for Little Miss. Last time she had worn adjustable double-bladed skates that strapped onto her shoes. So this is what I assumed she would wear this time and that is what she thought she would wear as well. So, cue major tantrum at skate hire when we are told that we are supposed to get the double-bladed skates from reception when we paid (the major tantrum was, errr, actually me!). So, back to reception, only to be told there are none left! Top tip #2, if you want your little one to wear the adjustable double-bladed skates, ask at reception (and pay a £10 refundable bond).

So, we go back to skate hire and I convince Little Miss that she really would like to wear ‘proper’ skates like a big girl, and she is pretty happy.

Just a couple more things about skate hire (as this really threatened to ruin our (my) whole experience before even getting on the ice!): 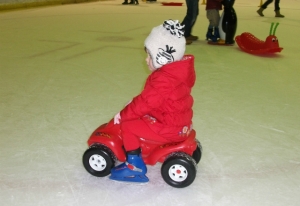 There was an area on the ice designated for ice tots (maybe 1/3rd of the ice rink) and there were lots of toys for the kids to play with, including penguin skating aids (which the kids could hold onto and push along), sledges, ride-on cars and skittles.

The lovely thing about this session is because it is for 5 years and under, there are no bigger kids zipping around and getting in the way of the little ones. Although there had been heaps of people queuing when I arrived, it wasn’t that crazy on the ice. You didn’t need to skate around in a clockwise direction or anything like that. Everyone just did their own thing.

Little Miss really liked skating with the penguin. She didn’t quite have enough strength to propel it forward herself, so I pushed it from behind. She seemed to do better when I pushed it faster – seemed to help her keep her balance.

Near the end Little Miss decided she wanted to go on one of the ride-on cars. We had quite a lot of fun with that, as she couldn’t push it herself with skates on, so I had to push and we got sideways quite a few times.

We ended up on the ice for about 40 minutes and Little Miss was quite happy to leave when it was all finished. I don’t know whether she would’ve stayed on for a whole hour even if we had been there earlier.

I have to say even though we had a wobbly start with the skate hire debacle, we ended up having a great time. Little Miss is still talking about it, so we’ll definitely be going back. This is probably how Jane Torvill started out!

All the important bits

Ice tots takes place every Sunday morning from 10-11am at Planet Ice in Peterborough. Planet Ice is in Mallard Road, off Bretton Way (PE3 8YN).

The ice tots session is £6.20 for one child. Any additional children are only £1.50. This includes skate hire. There is no charge for adults, except if you want to hire skates, which is £2. You can get a free ‘ice card’ on the Planet Ice website which will save you £1.50 each visit.

There is a cafe at Planet Ice serving fast food – burgers, chips, hot dogs and the like. No cake or muffins though. I didn’t eat there, but it is open in the weekends and school holidays whenever skating sessions are on. There is a microwave to heat up baby food. There are also lots of vending machines in the skate hire and reception area for chocolate, crisps, sweets and cold drinks.

There is an accessible toilet just by skate hire with a baby changing table. You can wear your ice skates in the toilets.