Little Miss has been a Peppa Pig fan since she was about 2 years old, so when work took me to Southampton last summer we decided to all go and visit Peppa Pig World at Paultons Park while we were down that way. We didn’t tell Little Miss where we were going, just that it was a theme park, as I’m not sure she would’ve been able to contain her excitement for the five hour road trip!

Peppa Pig World is part of Paultons Park and has seven themed Peppa rides, an indoor play area, small water park, playground as well as meet-and-greet opportunities with the characters. The rest of Paultons is also very family-friendly with several rides suitable for toddlers.

Our day at Peppa Pig World and Paultons Park

We stayed overnight at a Premier Inn so only had a 10 minute drive to Paultons Park in the morning. We got there at 9.30am and were in the first row of the car park! By this stage Little Miss had caught sight of the Peppa Pig sign and was literally bouncing up and down with excitement. The park opens at 10am, so we had a short wait before the gates opened. And once we were in, we headed straight for Peppa Pig World.

I’d been told to go on Miss Rabbit’s helicopter ride first, as it is the most popular ride. I guess it’s a glorified Ferris wheel, but Little Miss enjoyed it and it had a quite a good view from the top. We then did Peppa’s Big Balloon ride – another one I’d been told to go on early. Again, it wasn’t particularly thrilling, but the beauty of all the rides in Peppa Pig World is that even the youngest visitors can go on them. I saw a couple of mums with babies in carriers on the rides as well.

We worked our way through all the other rides, the longest we queued was 15 minutes for Peppa’s Big Balloon ride (second time round – it was Little Miss’s favourite). We had a look in at the indoor play area, but as it was such a nice day, Little Miss didn’t want to go inside.

Peppa Pig World itself is set in a relatively compact area, so little legs can cope quite easily. We did take the buggy, but we just left it by the first ride, then walked the rest, picking it up when we finished. 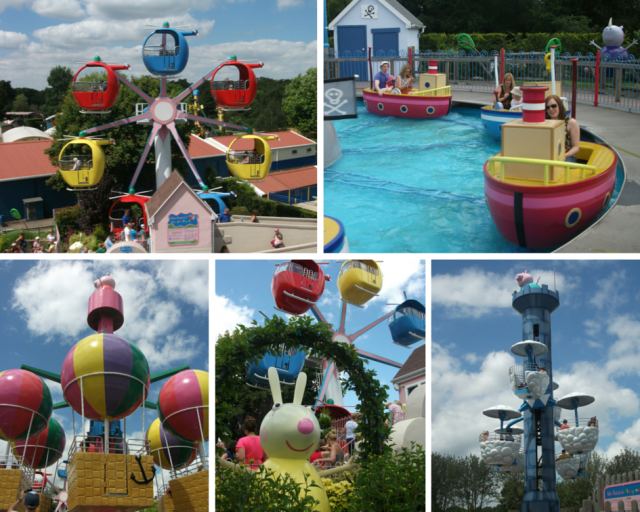 The rest of the rides

After lunch we decided to explore the rest of the park. The first ride we went on was the pirate ship (minimum height 90cm) and Little Miss absolutely loved it. As soon as we got off she wanted to go back on, so we did … four times! I finally tempted her off with the promise of a roller coaster – the Stinger (minimum height 90cm). As far as coasters go, it was tame, but Little Miss laughed the whole way round. And then we had to do it again! Luckily there were no queues, we basically got off and then back on again.

Little Miss then spotted the Sky Swinger. I wasn’t sure she’d be able to go on it, but the minimum height is 100cm and she just made the grade, so on we went. We had to ride in a double swing and I must say it wasn’t as ‘scary’ as it looked. And, true to form, as soon as we got off, on we went again (I think she’s going to be a real thrill seeker when she gets older).

The last ride we did was the Dragon Roundabout (minimum height 90cm), which went forward and backwards really fast. We did that one twice. Then we had bounce on a trampoline and bouncy castle, an ice cream and decided to hit the road at about 4pm.

There were lots of other rides and attractions we didn’t do. There is a large splash park with water jets, giant tipping buckets, fountains and super soakers. There is also a large area with birds and animals (including penguins) which we didn’t even see. I can see how you could make it a two-day visit. Little Miss really enjoyed Peppa Pig World, but when I asked her about her favourite ride she said the pirate ship. 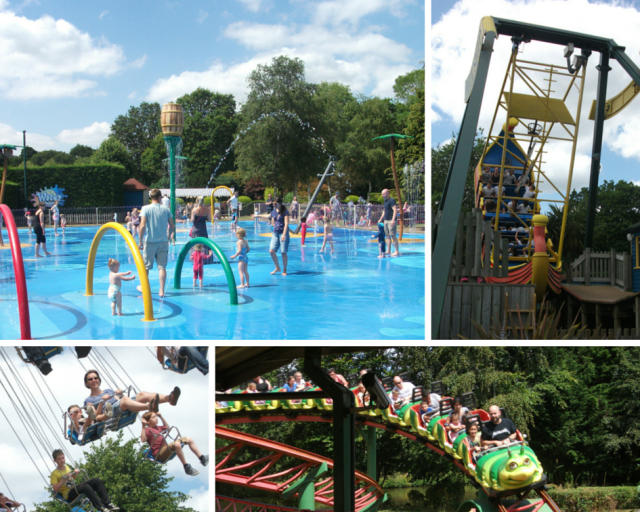 Some of the rides and attractions at Paultons Park.

If possible go on a week day outside of school holidays. I know, I know, it’s usually impossible to arrange these perfect conditions, but if you can, it is worth it. We went on a Tuesday about two weeks before the start of the summer holidays.

Get there early. The park opens at 10am. Get there as early as you can, even if it means waiting for it to open.

Go to Peppa Pig World first. Until about 11am we had no queues (or next to no queues). Do Miss Rabbit’s Helicopter ride first, as it is very popular and the queue moves slowly.

Take the buggy. Peppa Pig World itself is walkable for little legs, but if you want to explore the rest of the park, you’ll want your buggy.

Take your own lunch. This is something we didn’t do as I wasn’t quite organised enough in the hotel room. So we did fork out about £30 for lunch at Wildwoods. But there are plenty of places to have a picnic around the park.

Explore the rest of Paultons Park. There are several other rides suitable for children over 90cm, and of course if you have older children there are the ‘thrill’ rides.

Do it over two days. We only did one day, but I think we could’ve easily gone back a second day. There were rides we didn’t do, as well as looking at the animals and birds. And to be honest, I think Little Miss would’ve quite happily gone on all the same rides again! Paultons Park runs a ‘2 days for the price of 1’ promotion.

All the important things

Paultons Park is near Southampton. It is off exit 2 off the M27. It’s well sign posted from the M27. The postcode is SO51 6AL.

Car parking is free and there is plenty of it.

Adults and children over 100cm are £28 on the gate. If you buy in advance you pay £24.25. If you are going as a family, it is cheaper to buy a family ticket (available for families of three to five). Children under 100cm go free. The park is open February to December, and every day from 20 March to 2 November in 2015. See the Paultons Park website for opening times.

There is a Wildwoods restaurant by the main entrance serving hot meals, salads and sandwiches. There are also a number of cafes and kiosks around the park serving everything from ice creams to fast food. There are plenty of places to have a picnic lunch, included a covered seating area that seats 450 people.

As you would expect from a family theme park, the facilities for children are very good. Wildwoods has highchairs and a microwave for heating baby food. The toilets in some of the ladies toilets had toddler seats (the ones that lift up to leave the adult seat). It’s easy to get a buggy around the park and space to leave buggies at the rides.

← Day out at Stanwick Lakes
Visit to Pigeons Farm →