Hills and Holes in Barnack

Hills and Holes in Barnack

Since we live on the edge of the fens, hills are a bit of a novelty to Little Miss. Like most children her age, she likes to run up one side and then down the other (actually, usually falls down the other). But we don’t get a lot of opportunities to do this, unless you count the BMX track down at our local park! As mentioned in my post about Fineshade Woods, Little Miss’s Dad and I did a lot of walking pre-Little Miss, and we’re now finding she’s at an age where she can manage a small walk (an hour or so) without the buggy.

Hills and Holes (also known as Hills and Hollows) is a Natural England nature reserve and its undulating mounds are the result of limestone quarrying in medieval times. Interesting fact: the limestone from this quarry was used to build the Peterborough and Ely cathedrals. Little Miss wasn’t in the least bit interested in any of the history, when she first saw all the mounds she said ‘it looks like the moon’. And, if you use your imagination, it probably does.

Running up and down

The site covers 50 acres of grassland, with scrubby bush and a few trees dotted around. There is a circular path that goes around the perimeter and is signposted from the car park. But there are also a lot of other small paths through the site. 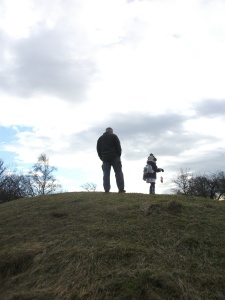 Dad and Little Miss climb to the top

Little Miss, like most other children who were also there, enjoyed running up and down the hills. Some are actually quite steep and a bit slippery to negotiate in wellies – you have been warned! We also had a game a hide-and-seek, which was quite a lot of fun until it took me about 10 minutes to find Little Miss and Dad (I think they were moving around, although Dad says this is not true) and we decided it probably wasn’t the best game to play in such a wide area.

Hills and Holes is home to several important (and rare) species of orchids, as well as other lime-loving plants such as pasque flower, wild thyme, violets, cowslip and ox-eye daisy – best seen in spring and summer. It is a Special Area for Conservation and half the surviving limestone grassland in Cambridgeshire is found at the site.

It’s also a dog-friendly site and plenty of people were out with their dogs. I didn’t see anyone with a buggy – I think it would be hard-going in a normal buggy; an off-road type might be OK. I saw quite a few mums and dads with babies in carriers, and that would be the way to go.

After about an hour, Little Miss decided she’d had enough of the moon, so we found our bearings again and headed back to the car. It’s a great place to go for a walk on a Sunday afternoon, with the added bonus of being somewhere the kids will also enjoy.

All the important bits 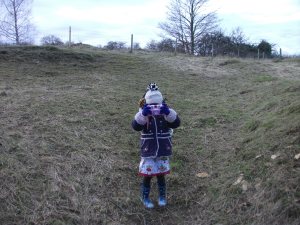 Hills and Holes is just outside Barnack village, on the Stamford side (west side). It’s not signposted from the main road (B1443), but is quite easy to find. If coming from Stamford, turn right at the war memorial just as you come into Barnack, then the next right (Wittering Road). If coming from Peterborough, drive through Barnack, go up the hill and take the left at the war memorial, then the next right (Wittering Road).

There is a small car park on Wittering Road. The day we visited, it was nearly full (about 10 cars). There are also lay-bys you can park in.

There are no facilities at Hills and Holes, although it would be a nice spot for a picnic in summer. There is a pub (The Millstone) in Barnack that does food.

There are no toilets on site. As mentioned, it’s not the most buggy-friendly site, especially in winter. An off-road buggy would probably cope, or take a baby carrier.